Alvin "Acóma" is a Boston-based artist with over 20 years of experience working as a painter, sculptor, and airbrush artist. His journey as an artist began at the early age of 11 as he practiced graffiti art. In 1995, he was featured in an exhibit hosted at the Massachusetts State House and titled "Graffiti In The House." His work has been auctioned off and purchased by many people such as Marcy Jackson (Assistant Attorney General), Paul Simons, from Partners and Simons and many more. The opportunity to feature his art at such a prestigious venue inspired him to create more works of art on canvas. Since then, he has collaborated with several artists and featured his talent on murals displayed throughout the Boston area. He attended MassArt where he studied graphic design and honed his artistic talent. Throughout college, he co-owned a business named MadInk, where he designed and airbrushed custom apparel for individuals who were looking for unique garments that could not be purchased in any major retail store. In 2014 he was commissioned by the Boston Police Academy to create a portrait of the late Mayor Menino and presented it to him during his last year in office.Acóma' continues to grow as an artist and believes in building avenues for individuals to explore their artistic talents. Today, he is the owner and Director of Paris Street Gallery/Studios, a space in Everett, Massachusetts that houses his own private studio and promotes art to the greater Boston-area community.

AcomaArt pledges to provide you with superior quality  Art and handcrafted products. 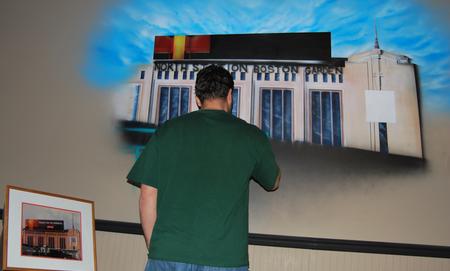 Pieces to the puzzle